The first one of our candidates’ concerts will be under the direction of Tim Hagans. Born in Ohio in 1954, the internationally acclaimed trumpet player with his expressive tone was literally socialized in big bands. Large formations are the common thread in his career. His collaboration for this performance with the Zurich Jazz Orchestra offers a cross-section of Hagen’s composition work. Besides beautiful ballads such as «Here With Me» and hard-bop-influenced titles like «Buckeyes» (both from Hagan’s Avatar sessions), there is a current project taking center stage this evening: Under the title of «Faces Under The Influence», Hagans has written a number of tunes he dedicates to actor and director John Cassavetes (1929-1989) and that were inspired by Cassavetes’ movies.

Tim Hagans
At age 20, Tim Hagans joined the band of Stan Kenton. He would stay for four years and then proceed to tour with the Woody Herman Big Band. Later on, he played concerts with the big bands of Bob Mintzer and Maria Schneider. Besides being a successful and sought-after sideman, Hagans released well over a dozen recordings of his own music, performed with smaller formations, such as «No Words» or the quartet album «Beautiful Lily» that strikes more lyrical notes. For these words, Hagans has been nominated for a Gramm three times. Every now and then, the trombone player has spent longer periods of time in Europe: From 1977 on, he lived in Sweden for four years and was a member of the Danish Radio Orchestra. Later, he was musical director of and composer in residence for the Norrbotten Big Band in Sweden.
www.timhagans.com 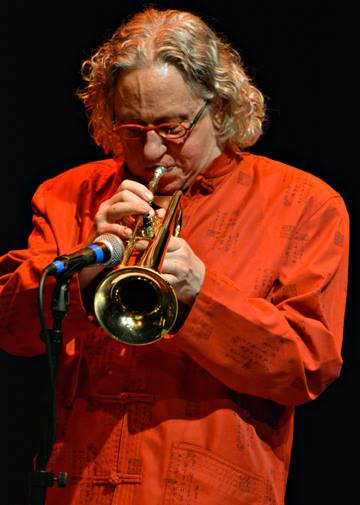